The "White Witch" from The Lion, The Witch and the Wardrobe 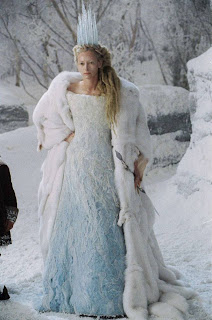 Tilda Swinton’s out fit as her character Jadis, the White Witch was designed by Isis Mussenden, a renowned costume designer who graduated from Parsons School of Design, who has also worked on other films such as Shrek.

The costume really went against any other stereotype of a witch being ugly and dark with the traditional black pointy hat, instead Mussenden and Swinton went with the idea to make her as Aryan as possible, more Nazi like, which was appropriate as the film was set during the 2nd World War.

Mussenden describes the White Witch being her most challenging design during the film in which the final outfit was actually inspired with the help of production designer, Roger Ford and her 4 year old son who actually came up with the idea of the witch “evolving” rather than “changing” clothing”.

The dress was made to look as though the witch had covered herself up in a bit of Narnia. The witch’s outfit carries a lot of symbolism, in which the materials and fabrics were sourced from all over the world to create the effect it had. The first layer of the dress is a velvet dyed, the second layer is felted wool and silk, it is the sheen of the silk that created these icy lines and then the final layer is lace with metallic thread and organza pieces that are sewn and burnt into the fabric. The bottom of the dress is made from a substance that reminded her of this waterfall they saw in New Zealand which projects connotations of the witch being made from water or ice. Then they drew the ice crackle from a small scale to a larger scale at the hem of the dress to create this illusion of height, that the witch was a giant. Other symbolic aspects of her outfit were her ice crown that melts throughout the film and her hair looking like roots from the ground. Overall all these aspects of her costume was what created this organic giant ice queen witch like character.