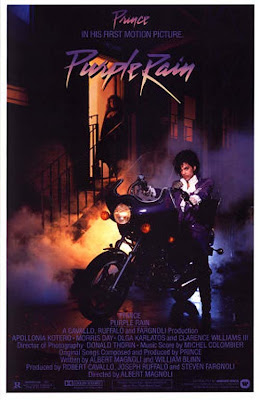 Prince, artist of funk and American pop, started to write down ideas for a potential movie in a small purple notebook. His inspiration for the movie was based on his life.

Albert Magnoli a young graduate from California Film School was hired to direct Purple Rain. He immediatly went to Minneapolis to research and write the script based on Prince ideas.

Marie France graduated from l’Ecole des Beaux Arts and la Sorbonne in Paris. She collaborated closely with Prince and continued working with him on his next movie «Under the Cherry Moon » in 1986 and many of his video clips. Later on in her career, Marie France worked on the movies « What ever happened to Harold Smith » (1999), « Garfield »(2004), « Buffy the Vampire Slayer »(1992) or « Beverly Hills 90210»

Another member of the costume team was Sonja Berlovitz. She graduated from La Chambre Syndicale de Couture and the Art Institute of Chicago. Today, she mainly works for theater productions and received an award for best costume designer.

Shortly after being hired, Magnoli left Los Angeles to go to Minneapolis. He had very little time to work on the script before the beginning of the shooting and had to work with Prince’s ideas. The writing began end of 1983 and the shooting took place in Minneapolis with a few scenes in Los Angeles.

Purple Rain is situated between fiction and an autobiographical piece. The Kid is a young brilliant musician aiming for success. Recognized and respected by his band, he is seen as the most talented artist of his generation. Evolving in a cabaret environment where relationships are short lasting and where things evolve rapidly. He comes from a difficult family situation and is challenged by his rival Morris Day. Throughout the movie, Prince will deal with his demons, find love and finally be recognized as a revolutionary artist. 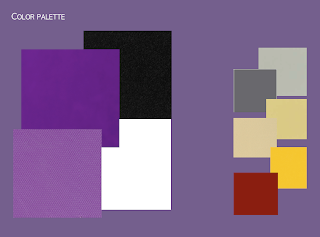 The color palette is based on blacks and whites but the most important color, which represents Prince: purple. Secondary colors, such as reds were used to create a warmer feel or to focus the attention of the audience on one character. Yellows, gold, silvers and greys are also very important to add this touch of glamour to the outfits. Although the movie is a love story, the thread that ties the movie together is music and performance.

As the movie begins, the audience gets a very good overview of the general feel of that period. All the people are gathering at the First Avenue Bar to listen to the latest bands and original music. People come from different backgrounds and lifestyles, gathered by one same passion. Stop shots show men and women both wearing make up, with different styles. Each main character is presented with their problems.

In Morris’ first scene, he is shown in a red tank top and underpants with a white headscarf vacuuming in his room. This first image is very strong because of the feminine side of Morris, which is exposed. It’s the only scene where Morris is displayed in a feminine outfit. Morris becomes Prince’s opposite as soon as he puts on his gangster suit and Stacy Adams shoes until the end of the movie. 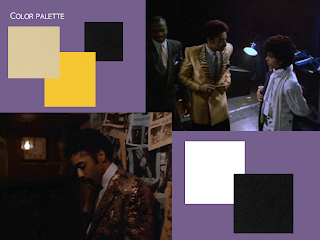 Morris Day likes money, power and beautiful women. The use of the colors yellow and gold represent this infidelity and greed. His gangster suits are very flashy and always have 2 tones.

The Kid (Prince) is more of a showman, a star. As the movie starts, Prince is viewed dressed in white performing and as the center of attention. Cultivating a more military style, his outfits and built with large shoulders, a tight waist and pants and 4 inch heels. This military style was not chosen randomly, he is the Revolution, the guide to a new generation and style.

As the movie goes on, the colors get darker; Prince wears a lot of black because he suffers from his dysfunctional family. As the audience delves further and further into his private sphere, Prince reveals more and more of his body. He wears fewer clothes as though to symbolize his honesty and openness towards the audience. Prince’s bike is also a very emblematic rock and roll accessory. It is painted in his color (purple) and it completes his bad boy style. It is also a symbol of freedom: he can hop on to the bike and ride away from his problems. 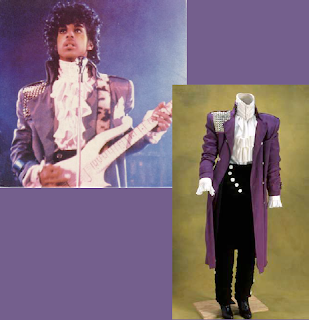 After getting over his sadness and frustration, his inspiration comes back. He is finally ready to prove to the world he has his place as a recognized artist and puts on the iconic purple coat to perform the famous Purple Rain song.

During the entire movie there’s a great use of ruffles, lace, leather and mix and match of fabrics. As we know, Marie France, the French costume designer worked very closely with Prince for his outfits. She surely inspired herself from French fashion History; famous outfits of French Kings and Queens. The ruffles and lace mixed with leather create a very original look cultivating the androgyny.

This movie is very iconic for the clothes, the style as well as for the music. Both genders share styles that blur the borderline between masculinity and femininity. The impact of the band The Revolution began with music and continued on with the clothes. Apollina’s style is very emblematic of what will follow later on. Playing with lace and leather.

In real life, Prince had at the time two direct rivals on the music scene: Michael Jackson and the group The Police. He differentiated himself strongly order to be fully recognized as a talented artist. He was the first to wear military inspired outfits and mixing and matching different textures such as leather and lace. The use of ruffles and shoulder pads was very specific to his style and it managed to leave a print in fashion.

Before Purple Rain, the famous soap opera "Dallas" soap opera had major influence on fashion. The romantic style was very popular. Women had for the first time the choice between different 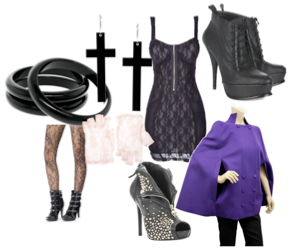 styles. Purple Rain introduced a more sexy rock and roll style. Madonna herself will later bring her own interpretation of style mix and match religious accessories to her outfits. Make up was another tool used by both genders to re-enforce the notion of androgyny.

Posted by Students in Paris at 7:01 AM